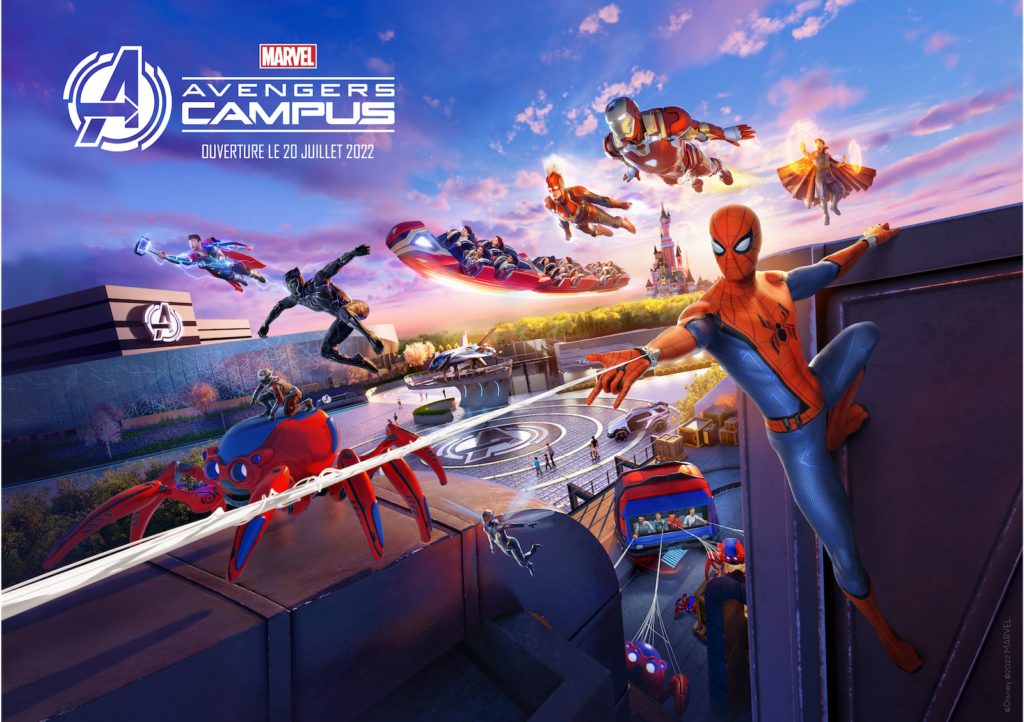 In search of adventures and new heroic missions? This way!
Since July 20, 2022, the most adventurous of you can visit the new theme land of Walt Disney Studios Park dedicated to the Marvel universe: The Marvel Campus Avengers, you can join the extraordinary school of superheroes created by Tony Stark.

BE THE NEXT RECRUIT TO CAMPUS AVENGERS AT DISNEYLAND PARIS

The Avengers Campus offers visitors a total immersion thanks to the scenery designed to best resemble those of the Marvel films.

Your days will be punctuated by heroic encounters with Spider-Man, Iron Man, Black Panther, Captain Marvel, Black Widow, Thor and Loki all over the new land.

On the rooftops of the campus, spectacular stunt shows and fights throughout the day!

Before your stay at l’Elysee Val d’Europe, order your tickets for Disneyland Paris directly from our teams.
(Subject to availability).

Before you become a true campus recruit, you will obviously have to show what you are capable of!

For this, 2 new attractions are born at the Marvel Avengers Campus! A new high-speed roller coaster (clearly intended for thrill seekers) and a futuristic attraction with a total 3D immersion, for family fun. 😊

Put on your super suits and fasten your seatbelts.

After being briefed by Iron Man in person, you will embark directly on an Earth rescue mission alongside your favorite heroes, all under the supervision of F.R.I.D.A.Y, the famous Artificial Intelligence created by Tony Stark.

The competitive one : Spider-Man W.E.B. Adventure

You can visit its laboratories and meet young Peter Parker at the controls… before the situation degenerates and you have to help him fight his own uncontrollable tools: spider-bots, using real spider webs!

Meet your favorites Marvel heroes in the Hero Training Center

Enter the training center and you can chat and take pictures with Iron Man,
Spider-Man or Captain Marvel, although across the land, other superheroes like Ant-Man and the Wasp, Captain America, Black Panther, Black Widow, Dora Milaje, Thor, and Loki also walk there.

So put on your cape and come lend a hand to your favorite superheroes!